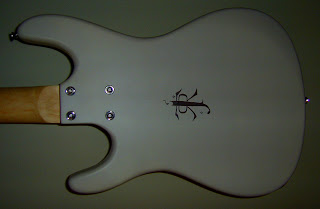 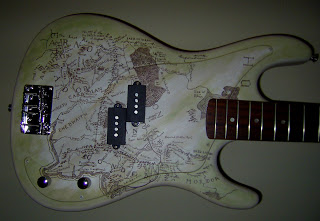 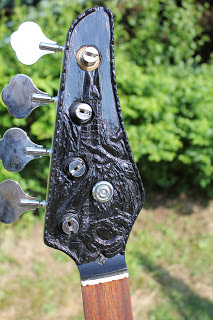 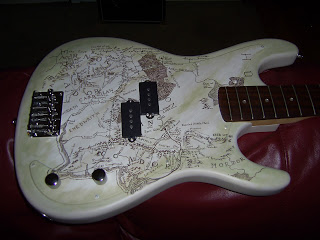 I made this bass for my best friend.

I painstakingly painted the map from visual references. It would be more accurate had I projected it onto the surface, but I did it freehand instead- not to be some kind of art hero, but because I didn’t have a decent projector handy. I do the best with what I’ve got.

The process was simply repainting the body.  I used a tan / beige base color for the body, then dry-brushed leathery highlights on to make it more “mappish.” Afterward, the day-long process of painting the map on began (literally spending a whole day sitting and painting. Actually, it was pretty great).

Later on, I decided to spice up the peghead. I did a relief carving of Treebeard and the Ents attacking Orthanc. It’s painted in a black gloss resembling Orthanc’s exterior.

I thought about buying Lothlorien Leaf clasps to pin on a custom leather strap, but I haven’t gotten to that part yet. Maybe for Christmas…

(See the LOTR-themed guitar I made for his brother.)

View all posts by Travis Stevens

In case you were having trouble sleeping because you were wondering whether your Dino-Riders™️ Struthiomimus saddle would fit on your Jurassic World ®️ Mononykus... I’m here for you. #jurassicpark #jurassicworld #dinoriders #tyco #mattel #struthiomimus #mononykus #dinosaurs #dinosaurtoys #dinos #skate #rulons
So there’s a nearby Pizza Hut™️ that has preserved the year 1989, and I love it. Took the family, and guess what- they ran out of Land Before Time®️ puppets like 30 years ago! I should have complained to the manager- what if I hadn’t brought our own?!! My son even got to use a BOOK IT coupon (how I got everyone onboard in the first place); this night was 2 legit. Great quote of the night: @kokes9 “Daddy has a nostalgia problem.” 🤣🤣🤣😂😂😂😅😅😅😁😟😞🍕🍕🍕🍕#pizzahut #80s #childhood #thelandbeforetime #landbeforetime #pizzahutpuppets #puppets #childhood #nostalgia #landbeforetimepuppets #frozenintime #90s #retro #vintage #bookit #personalpan
Makin’ some Neutrinos vehicles. #turtles #ninjaturtles #toonturtles #teenagemutantninjaturtles #heroesonthehalfshell #playmatestoys #toys #actionfigures #figures #custom #customfigures #customtoys #travisstevens #cartoon #ninjaturtlescartoon #footcruiser #shredder #neutrino #neutrinos #dimensionx
Finished 4 of the Ghostbusters MONSTERS re-carding projects. Still need to do “fan-favorite” Quasimoto 😉 and the Wolfman. Touched up card damage with a marker, spent some time flattening the cardbacks (might do some more), refurbished the figures, and reattached the vintage bubbles. #travisstevensnerdcrafts #ghostbusters #kenner #kennertoys #kennerghostbusters #kennerghostbusterstoys #monsters #universalmonsters #universalstudios #universalmoviemonsters #dracula #frankenstein #zombie #mummy #80s #toys #actionfigures #nostalgia #retro #repair #restoration #ghostbustersmonsters #
So many trolls on the internet... I figured I should see if any had a brain. 😉😉😉😉😉😉😏 Actually, I needed its hair for another project, and I hate wasting plastic. ‘Specially a legit Russ®️ troll. So, sculpted open brains it is! #trolls #troll #russ #russtrolls #russtroll #customtroll #customfigures #kitsch #weird #horror #brain #trollbrain #toys #travisstevensnerdcrafts
#trolls #troll #russ #russtrolls #russtroll #trollfan #trolltroll #internettroll #trollintrollintrollintrollintrollinYEAH
@frankie_sparkle_tits @toyspaceship @dnllbrn @chelsiestein @monasmias81 I found this vintage McDonald’s calendar. I always love me some classic McDonaldland merchandise, but this particular era really does it for me. #mcdonalds #mcdonaldland #happymeal #ronaldmcdonald #mayormccheese #mcdonaldsprofessor #calendar #vintagemcdonalds
I had a fairly beat up vintage Star Wars box given to me missing flaps, so I decided to restore it just enough to reinforce it with foamboard for storing random odds & ends in the nerdcave. Additional gestural directional assistance provided to help you zero in on the box I’m talking about. #idhateforyoutomissit #starwars #vintagebox #kennerstarwars
I swear I’ll clean this up eventually. Er, soon. Soonish.
I did a quick drawing lesson with my 6 year old son- breaking what you’re drawing into shapes and then adding detail. We used this 3D printed Kenner Super Powers-based Man-Bat as our model- he’s already WAY better than I was at that age! Also, the quotes don’t really make sense for Man-Bat, but we do say these things with a harsh Jersey accent around the house, so... 🤷🏻‍♂️ #drawing #batman #manbat
Ended up in the area of my rearing (Western New York) to meet up with the fam for my grandpa’s memorial service. Thanks to @kokes9 for making the entire adventure more successful / improved from every angle (per the usual), which included her getting unexpectedly barfed on by our younglings *repeatedly* with nowhere to go but the car. After making it through the service due to her hygienic sacrifice, we ended up in Niagara Falls and I wandered into a random pizza shop called Donatello’s. I didn’t realize this was actually a casual Ninja Turtles reference. Could anyone ask for more than a deliberate Ninja Turtles connection in a pizza restaurant following a day with the rollercoasters of barfing progeny, interstate travel, and dramatic life events? Also, check out that chill cat. I learned to love the smell of coffee in his presence, which has become a favorite part of every day life as an adult. A lot of great formative memories. At the end of the day, definitely feeling grateful, thankful, mindful of all that I’ve been given. I usually throw out #hashtagblessed as a joke, but I’m feeling it earnestly tonight. And I really hope the kids don’t barf tomorrow.
I was graciously gifted 12 Days of Star Wars socks! Every day is now a LITTLE bit better.
%d bloggers like this: